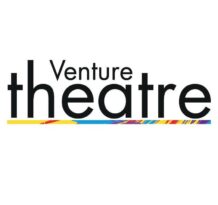 LTG is once again delighted to welcome a new LTG Member to the Central Region. They are The Venture Theatre, Ashby de la Zouch, in Leicestershire.

You can read about their history HERE on their website, but in short, Ashby Dramatic Society (ADS) was formed in 1921 by Leonard H. Matthews and they initially met in what is now La Zouch restaurant. In the 1970s, ADS purchased and converted the church hall of St Helen’s Parish Church and they opened for performances in 1981. They received a National Lottery grant in 1995, which enabled major refurbishment to take place and the 112 seater theatre reopened in 1996.

The list of past plays on their website confirms that they stage a diverse range of productions and they also hire the theatre to visiting companies. They were very busy during lockdown and, working with Pudding Bag, produced over 70 very entertaining videos. Their first full production in September was Agatha Christies’ The Unexpected Guest and next up is The Last Quiz Night on Earth.

We look forward to meeting them at the National Conference in May 2022 and to visiting their theatre.