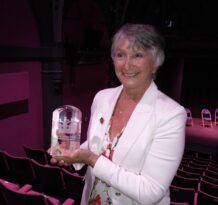 Volunteers from the Corn Exchange in Wallingford and the Sinodun Players, were at the theatre to witness the presentation of the Queen’s Award for Voluntary Service by Brian Buchan, Vice Lord Lieutenant of Oxfordshire to Gloria Wright, Chair of the Sinodun Players.

Because of the pandemic the numbers of volunteers in the theatre were limited but the event was streamed live to other volunteers. The recording will be available to the public soon on the Corn Exchange website. The presentation was followed by a reception in the garden of Bridge House by the Thames

Lynda Atkins, Deputy Lord Lieutenant spoke about the work she had done in sponsoring the award and although she knew about the Corn Exchange before, she was amazed at the dedication of so many volunteers over the years. Dr. Kate Tiller, Deputy Lord Lieutenant, spoke about the formal process that had been undertaken but also the delight in finding out about all the activities that were carried out behind the scenes at the theatre.

In presenting the award, Brian Buchan commented on the small number of these awards compared to the individual awards which meant that they were really significant and complemented the volunteers on the persistence in coming through the pandemic unscathed.

Gloria Wright, chair of the Sinodun Players received the award and thanked the volunteers for their support from the early days through to the current times. She said that there had been many a crisis to overcome recently but the effort from everyone had succeeded and we were now open again.