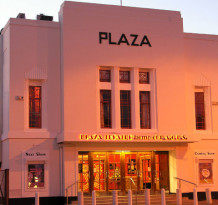 The Theatres Trust announce that five theatres have been awarded a total of £22,500 from its Theatres Protection Fund. One of the five is the Plaza Theatre, Romsey who have been awarded £5,000 to fit a stair lift replacement.
The Press Release notes that “The Plaza opened in 1931 as a cinema. In the 1970s cinema use ceased and it became a bingo hall, until finally closing in the early 1980s. The Romsey Amateur Operatic and Dramatic Society (RAODS) acquired the freehold of the Plaza in 1982 and began converting it to theatre. This grant will support the replacement of a broken stair lift which will make the auditorium accessible once again.

The Theatres Trust also announces that applications for the next round of UK Theatres Small Grants are now open. The scheme is a capital fund that awards up to £5,000 to theatres across the UK run by charities and not-for-profit groups that can clearly demonstrate the value capital improvements to their theatres would make to their work in local communities.
The UK Theatres Small Grants Scheme was launched with funding from the Andrew Lloyd Webber Foundation and Judy Craymer MBE. With continued support from the Andrew Lloyd Webber Foundation and the Charles Michael Holloway Trust, the scheme has been extended to 2020.
To be eligible you must:
• own or manage theatres with titles or signed leases of more than 5 years on buildings in England, Scotland, Wales and Northern Ireland
• demonstrate that they run a regular theatre programme of professional, community and/or amateur work presenting no less than 30 performances a year
• have a bona fide UK charitable or not-for-profit legal structure and be able to provide certified or audited accounts for at least two years
Round 13 will close on 8 January 2019 at noon. Contact advice@theatrestrust.org.uk for more information.