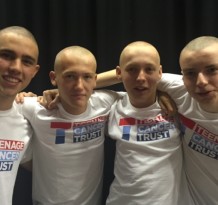 On Saturday 27 August, in front of a supportive audience at The Courtyard Theatre in Chipstead, 4 brave young men had their heads shaved in aid of Teenage Cancer Trust. You may wonder why they were motivated to take such dramatic action, and indeed drama was at the heart of it. From 6-10 September, they all played patients on a teenage cancer ward in Eugene O’Hare’s brilliant one act play, Hospital Food. Such was the young actors’ desire for realism that they allowed themselves to submit to the clippers and raise money for this worthy cause at the same time. The total raised is currently at £2,160. The four boys, Ethan Elsdon, Luke Steele, Ben Jeffreys and Alfie Earl Day, all started at Sixth Form College this week. Hospital Food played as part of a double bill with A Handbag by Anthony Horowitz at the Courtyard Theatre. www.chipsteadplayers.org

Article by David Perry of The Courtyard Theatre, Chipstead