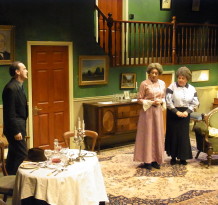 “Well, Chipstead Players, you certainly excelled yourselves with this production. Right from the moment the curtain opened onto that elaborate set with its long upstairs landing, the die of excellence was cast.

And speaking of cast, there was not one weak link in the many characters needed to tell this poisonous tale, delivered with such gentility by Jan Robinson as Abby Brewster and Julie Cumbo as her sister Martha. Between them, these two managed to make their undoubted wickedness seem totally acceptable, as never once in Joseph Kesselring’s intriguing script did they show remorse. Three brothers complete the family – Toby James as Mortimer, the good one, given all the concern needed by one who finds a body in the window seat, whose death is happily claimed by his sisters, and Robin Clifford as Jonathan, also a murderer, but a real baddie. The third Brewster brother is the harmlessly mad Teddy with Robert Owen creating a delightfully zany character who believes himself to be Teddy Roosevelt.

Add to this unusual group Nick Foster’s Dr Einstein, complete with appropriate accent and the tale gets even more incredible.

Mortimer is a theatre critic, with some stinging lines about this occupation I chose to ignore, and is planning to marry Elaine Harper, enthusiastically played by Kirsty Hudson. When events and macabre discoveries ensue and factoring in the unbalanced state of his siblings, he tries hard to extricate himself from the marriage, fearing he too will succumb.

Police officers Brophy and Klein – Adam Lunberg and Ethan Elsdon, drop in and out of the Brewster’s Brooklyn home, humouring Teddy and praising the sisters’ kindness to the community. Geoff Thorn as Officer O’Hara adds to the mayhem by trying to get Mortimer to help him with a play he is writing and Colin Edgerton, Paul Valleau and Will Harris take up small but important cameo roles.

Two production managers, Louise Delaney and Jo Hopkins, helped get this show to the peak of condition but the highest accolade goes to director Eve Manghani who must have been as pleased as punch with her production.”

Submitted by David Perry of  The Courtyard Theatre, Chipstead