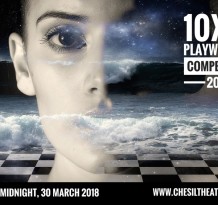 The Chesil Theatre is currently inviting submissions for 10-minute plays. The theme for this year’s eagerly awaited 10×10 playwriting competition is HIDDEN WORLDS. Deadline: Midnight, Friday 30 March.
Established in 2008, originally in partnership with the Nuffield Theatre’s former Writers’ Group, this increasingly popular biennial playwriting competition celebrates its tenth anniversary this year.  Since then, 10×10 has staged the plays of fifty emerging, established and award-winning playwrights, collaborated with as many directors and many more actors and received hundreds of submissions.
Ten plays will be selected for performance at the 10×10 New Writing Festival being held in October 2018. Former winners have gone on to have their plays produced at the Edinburgh and Brighton Fringe Festivals, on the London Fringe and at various locations across the UK and worldwide. Other have subsequently formed their own theatre companies and been signed up by literary agents.
Festival Director, Deborah Edgington, says ‘We want writers to use their imagination to explore the broadest possible scenarios for this year’s theme and are very excited to find out how they will interpret ‘Hidden Worlds’. We want to be stirred, excited and surprised by the writing. For the past ten years 10×10 has provided a vital platform for playwrights with many going on to have further playwriting successes. ‘
Cressida Peever (2016 winner) explained ‘[10×10] gave me a real confidence boost and encouraged me to keep writing. Since then, my work has gone from strength to strength and I’ve enjoyed many more successes.’
For the competition criteria and to download a submission form, visit chesiltheatre.org.uk or mail 10×10@chesiltheatre.org.uk