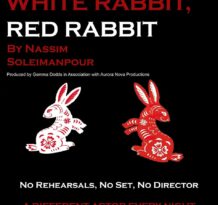 Shortage of space in the June edition of the LTG Newsletter means that only a small part of this article from Gemma Dodds, Caxton Theatre could be included. During the online performance of White Rabbit, Red Rabbit, unusually for a Stage Manager, Gemma was visible. Here she talks about her onscreen stage manager role and the gestation of the production.

I initially found White Rabbit Red Rabbit back in 2017. I think I was looking for something a bit different and stumbled across it. I ordered the script but was then in a quandary as to whether I should even read it. If I read it, would I ever be able to get it performed? It sat unopened for about a week until I decided I had to read it. Once I did, I then had to find an appropriate actor to present it while I would produce it.

I am glad I took on the challenge. We performed three nights, originally at The Caxton Theatre, with three different performers, and the experience of watching different people picking up that script was so exciting. I thought that would be the last I heard of it, but in January all previous producers of the script were invited to present a one-off performance for free. It was to celebrate theatre and the resilience it has had throughout lockdown. The performance had to take place on the same date at the same time across the world: at 8:00 pm in each respective time zone there would be a performance. How could I not take up this adventure and what a brilliant opportunity to take part in something when most of the world was unable to open their theatres’ doors.

We had Zoom meetings, and the script was altered and changed to allow for performances taking place online. It was very exciting to be planning something and, because it was free, we could produce it for free too. Lockdown has been hard on a lot of people and we didn’t want to lose the opportunity for a free night out at the ‘theatre’.

I had a couple of pre meetings with the actress Niki Felstead, but she was not allowed to know anything about the script. On the night, I was very nervous but Niki was amazing. I took on the role of stage manager, making sure that all mics were on or off at appropriate times and the chat box was open, or not, when required. There was no way that these things could have been rehearsed, especially choosing the volunteers during the performance. In the live productions, audience members can volunteer, but this time I had to pick someone who had their camera on and who hopefully had a good connection! It was all very stressful, but in a fun way. There are other Nassim Soleimanpour plays where the script gets handed to the actor on the night. I would love to take part in these as I think the audience are with you and want it to go well. Fingers crossed, this could be something I could do in the future, when we are back with a live audience…hopefully very soon.