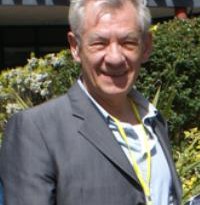 “Like many professional actors, I am a graduate of the Little Theatre Guild, whose member theatres are spread across the country. In many places, the local Little Theatre is an outlet for anyone who enjoys putting on plays, in whatever capacity. Audiences who don’t live close to a professional theatre are grateful beneficiaries. At Wigan Little Theatre I saw my first Macbeth and Twelfth Night and at Bolton Little Theatre, as a youth, I relished acting alongside veteran amateurs whose dedication and talent remain, 60 years on, an inspiring example.

The 104 Little Theatres are each different physically, many of them converted from their original use, an oast house, a chapel, a large house, a small factory. Yet the atmosphere of joy and hard work is universal. There are youth groups, pantomimes, new plays and classics, something for everyone. Whether you act or direct, design, build, sew or mend there is a welcome waiting.

For friendship and a good night out, I hope you support your local amateurs”

During the year; the Guild was in the national news with an off-stages uccess Our Chairman Eddie Redfern with others fought off a government proposal that Little Theatres should register multiple guardians of youngsters in their productions, when, it seemed to us, ample safeguardsw ere already working well. The scheme has been put on hold pending a review. This was achieved in part becausea 100 groups across the country supported the Chairman: a victory for common sense and for the Guild’s combined strength. So, end-of-year shows, where children abound, can continue safely and joyously as ever (providing of course they are licensed and have the appropriate number of chaperones).Nor is the vital work of Youth Groups to be impeded. l’ll always be grateful for my own early acting at Bolton Little Theatre and am relieved that the latest generation of youngsters can still explore the fun and the satisfaction of putting on plays.

I missed the AGM this year; but in October, I made it to Bristol for the Southern Region meeting, where I joined in a couple of workshops and relished the discussions between delegates, haring experiences and learning from the exchange.

The Bristol weekend climaxed with a daring production of Edward Bond’s The sea by the Kelvin Players celebrating their 80th anniversary. Although more popular playwrights are the staple of most member theatres, it’s the lesser known plays and new ones which can give a season its focal point. Of course, encouraging audiences to relish the unknown is a constant problem but elsewhere, beyond Ayckbourn, there is an exciting world to be explored’ This was amply demonstrated at the Central Region AGM
when Newport were able to stage 4 one-act plays in celebration of the Ryder Cup. Bravo’.

I haven,t been able to visit member theatres very much this year but if there is a special occasion where your Patron would be welcome, please let the National Secretary know in case l’m free to join in.

All best wishes for the Year ahead.