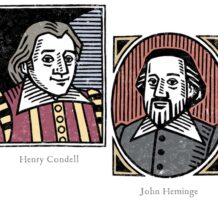 Celebrating the 400th birthday of The First Folio in 2023

Update: Those who attended the LTG National Conference at Southport will recall the presentation made at the Open Forum on Folio 400.

Bringing together a distinguished cast of academics and actors, the Folio400 website aims to “arrange an array of ‘shows, pageants and sights of honour’ to celebrate the 400th Birthday of The First Folio, the first printed edition of Shakespeare’s collected plays, in 2023.”

These currently include, but are not limited to: